With the largest source of disagreement between the U.S. and Israel — the Iran nuclear deal — virtually collapsed, President Joe Biden would have little to fear on the policy front from a more right-leaning government if former Prime Minister Benjamin “Bibi” Netanyahu returns to leadership, according to experts.

The right-wing champion of Israeli security and former prime minister has clawed his way to a strong position in the election to be decided Tuesday, Israel’s fifth in four years, The Wall Street Journal reported. A Netanyahu win will add a layer of rhetorical hostilities to policies that will likely remain consistent now that the nuclear agreement, which Israel’s leaders have consistently opposed, appears indefinitely stalled, experts told the Daily Caller News Foundation.

“People are watching this and saying, if [Yair] Lapid wins, it’s good for Democrats, and if Bibi wins, it’s good for Republicans,” Jonathan Schanzer, senior vice president for research at the Foundation for Defense of Democracies, told the DCNF. That framing is flawed, according to Schanzer.

“As things are right now, I don’t expect things to become antagonistic, not with the Iran deal on the back burner,” he said, adding that eliminating “lingering” prospects for a return to the Iran deal would “remove probably the most contentious issue that could have been between Bibi and Biden.”

Netanyahu jumped into the race after a fragmented coalition government, cobbled together by former Prime Minister Naftali Bennett in 2021, collapsed amid defections and failure to reinstate a long-running citizenship law. That government only held power for a year, after four inconclusive elections saw Netanyahu slowly lose his grip on power, according to The Washington Post.

Now, polling shows Bibi’s Likud party just short of the 61-seat majority needed to dominate the parliament, or Knesset, according to the Post.

“If it is a Netanyahu-led government, the biggest issue will be Iran,” Shoshana Bryen, senior director of the Jewish Policy Center, told the DCNF.

“The Biden administration still wants to find a way to deal with Iran,” she said, even though prospects of a deal appear slim. (RELATED: US Leaving The Door Open For Iran Nuclear Deal While Accusing The Country Of ‘Exporting Terrorism’)

Biden’s Democratic predecessor, former President Barack Obama, sparred with Netanyahu over the nuclear deal. The prime minister opposed Obama’s campaign to strike a deal with Iran exchanging sanctions relief for a pledge from the Ayatollah to clamp down on Iran’s nuclear program, according to the Associated Press.

The Joint Comprehensive Plan of Action’s sunset clause on restrictions to Iran’s uranium enrichment activities would reverse any gains accomplished, giving Iran free rein to develop a nuclear weapons program and fundamentally threaten Israel’s security, Netanyahu claimed, according to Times of Israel. Netanyahu pressured Trump to rip up the deal, which he did in 2018.

When Biden arrived in office, he prioritized reigniting the agreement, prompting opposition first from Likud, then from the centrist Bennett government.

But Iranian intransigence has made it questionable whether the parties can ever reach an agreement, according to the State Department. Spokesperson Ned Price said on Oct 12. reaching the deal was no longer an administration priority, indicating negotiations, after months of fits and starts, may have drawn down indefinitely.

With the deal out of the picture, Biden and Netanyahu will exchange heated rhetoric, but underlying policy trajectories will remain the same, both experts explained to the DCNF.

Schanzer suggested the Biden administration might actually collaborate with Israel on Iran, despite Bryen’s misgivings.

“This could be fascinating to watch if the White House and the prime minister’s office are able to work together to actually undermine the [Iranian] regime through sanctions and political pressure and other low intensity operations. This could be a real positive development and I think Netanyahu would welcome it,” said Schanzer. 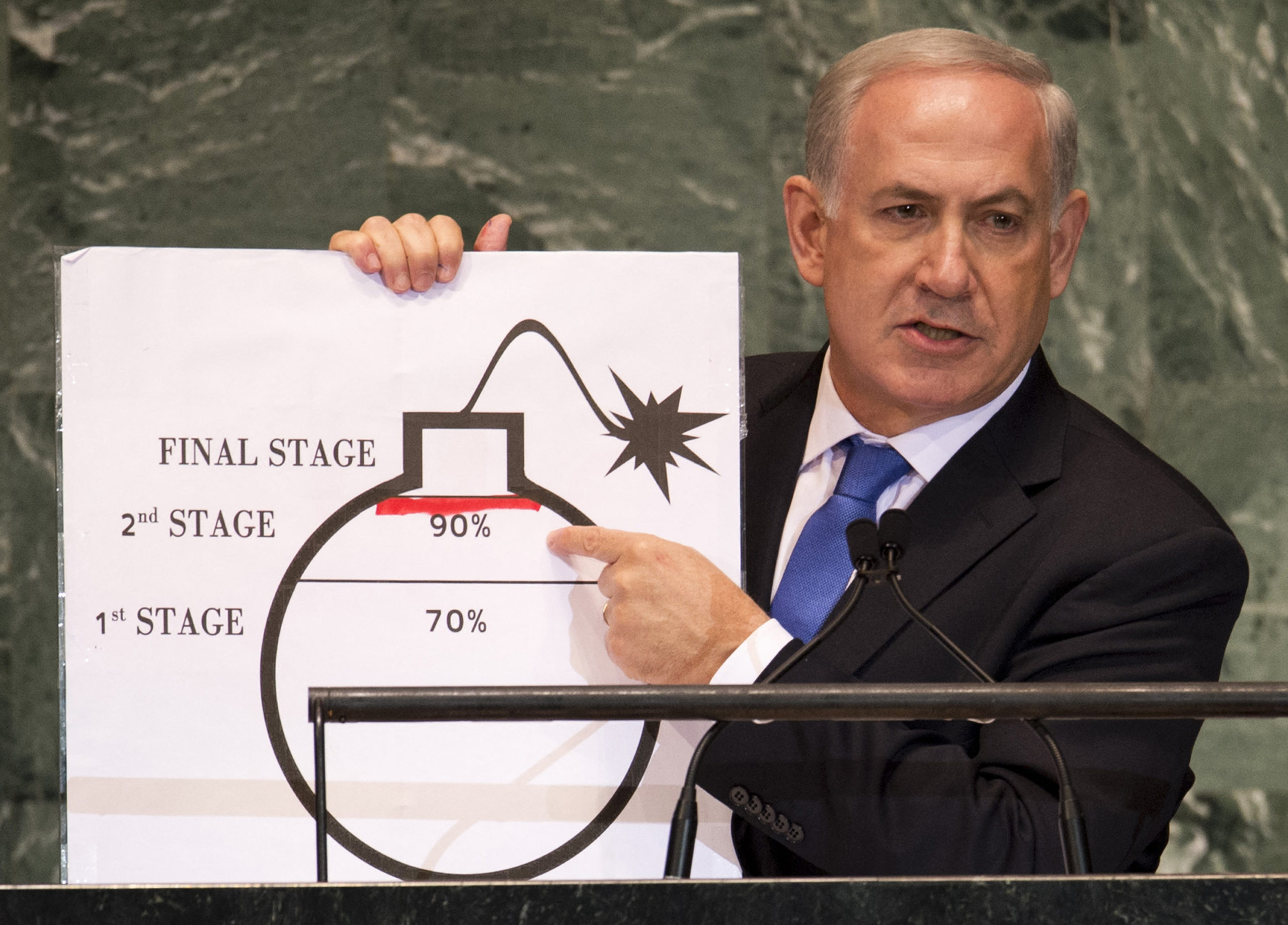 TOPSHOT – Benjamin Netanyahu, Prime Minister of Israel, uses a diagram of a bomb to describe Iran’s nuclear program while delivering his address to the 67th United Nations General Assembly meeting September 27, 2012 at the United Nations in New York. (Photo by DON EMMERT/AFP via Getty Images)

The U.S. and Israel have a robust history of cooperation on intelligence, counterterrorism and other security matters in spite of all their public bickering, which Netanyahu himself acknowledged in reference to Obama.

“Biden may ‘punish’ Israel in one way or another — mostly by pushing for negotiations with the [Palestinian Authority] or something like that, or refusing to veto a nasty vote at the UN — but both countries have bottom lines that are understood,” Bryen told the DCNF. “Even Lapid told Biden that Israel would not support Washington on an Iran deal.”

Netanyahu will be less apt to acknowledge a future for the two-state solution with Palestine and may move on that issue independently from U.S. sanction, Schanzer speculated. However, he won’t try to pull out of the Israel-Lebanon maritime agreement negotiated in part by U.S. energy envoy Amos Hochstein despite threatening to do so.

“If there is a clear line of communication about expectations on both sides, these sorts of things can be handled,” Schanzer told the DCNF.

As president, Biden has registered a few political wins with Israel: negotiating a handover of contested territory to Saudi Arabia and the maritime deal that may have prevented a second flare-up with Hezbollah. However, he admitted in June that “the ground is not ripe” to restart efforts at securing Palestinian independence, another administration goal.

Netanyahu has also broken from the interim government in floating the potential of arms transfers to Ukraine, something caretaker Prime Minister Lapid has forestalled to preserve a fragile understanding with Russia over Syrian counterterrorism operations, according to The Jerusalem Post. It remains to be seen whether the policy will carry through should Bibi become prime minister.

“You see the deepening of the relationship, even when politicians disagree on on key policy issues,” Schanzer told the DCNF.

The White House and Netanyahu did not immediately respond to the DCNF’s request for comment.