Democrats focused on coronavirus, climate change, racial inequality and more during their party’s convention, but none pf the keynote speakers mentioned rising violence in cities across the country or the opioid epidemic during the primetime program.

The two issues have been worsening in part due to nationwide unrest and the pandemic, media reports and studies say. The Supreme Court — a large focus of the 2016 election — was also largely ignored.

Though many protests against racial inequality and police brutality following the May 25 death of George Floyd have been peaceful, violent riots are still breaking out in cities across the country, including Chicago and Portland, Oregon.

In Portland, protests, sometimes declared riots, have been ongoing nightly for months. Protesters have clashed with police and federal agents, while rioters have devastated businesses and federal buildings, leading to heightened tensions between Oregon public officials, including Gov. Kate Brown, and President Donald Trump.

Chicago has also already had more than 464 homicides this year — 135 more than in all of 2019, according to the Chicago Tribune. Homicides in New York City were up over 20% through the first half of 2020 compared to the previous year, NBC reported.

Curbing gun violence, however, was discussed in detail across the four nights of the DNC. The issue was emphasized in a number of speeches, including ones given by former Rep. Gabby Giffords and Democratic nominee Joe Biden.

Chicago, for example, has seen massive spikes in gun violence. But the Windy City has also faced significant rioting and looting, which was not mentioned by keynote speakers during the DNC. 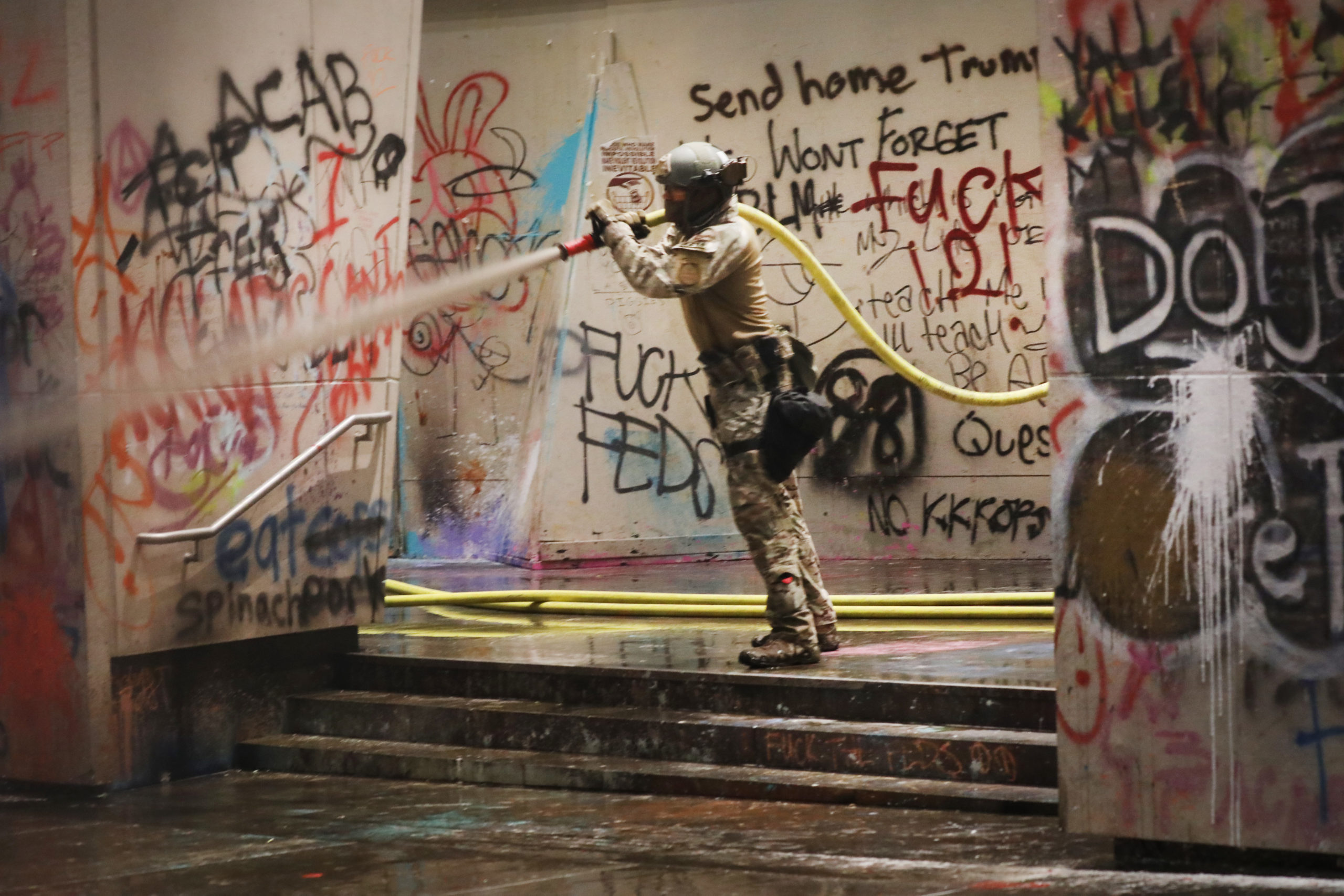 Federal police clean in front of the Mark O. Hatfield federal courthouse in downtown Portland as the city experiences another night of unrest on July 28, 2020 in Portland, Oregon. (Spencer Platt/Getty Images)

The opioid epidemic, which has killed hundreds of thousands of Americans in the past decade, has also intensified during the pandemic. Use of fentanyl, a synthetic opioid, has increased 32% since the coronavirus was declared a pandemic in March, a Millennium Health analysis found in July.

Drug overdoses in total were up 18% over the same period, according to Millennium Health, a research laboratory that works in partnership with the Department of Health and Human Services. (RELATED: Couple Who Waved Guns At BLM Protesters To Defend Home Slated To Speak At RNC)

Senate Minority Leader Chuck Schumer was the only nighttime speaker who referenced the court, saying that Democrats will “restore a Supreme Court that looks out for people, not corporations,” omitting any mention of how the election could shape its makeup for decades, NBC News reported.

“We have two liberal justices over 80 years old, which means this election will make or break the future of the Supreme Court,” said Brian Fallon, the executive director of the liberal advocacy group Demand Justice, NBC reported Friday.

“None of the proposals we discussed this week, even if signed into law by a President Biden, will stay on the books for long given our current Supreme Court,” he continued. “And yet we heard so little on the issue.”

The issue was central to the 2016 presidential election due to the vacancy created after Justice Antonin Scalia’s death that February. 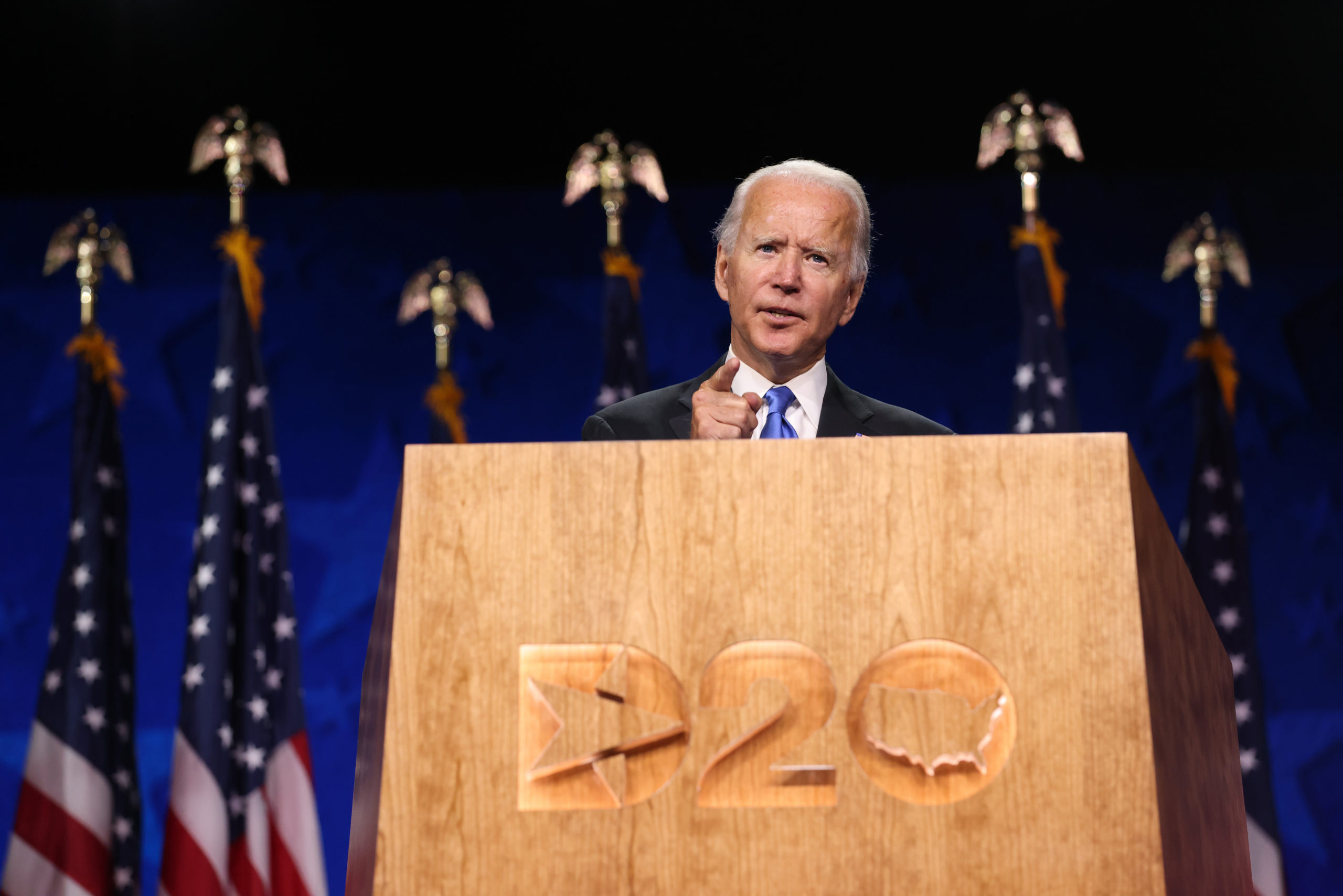 Democratic presidential nominee Joe Biden delivers his acceptance speech on the fourth night of the Democratic National Convention from the Chase Center on August 20, 2020 in Wilmington, Delaware. (Win McNamee/Getty Images)

Meanwhile, high-profile progressives in recent years have advocated for adding additional seats to the Supreme Court. Biden has rejected that proposal, though Harris has said she’s open to the idea.

Trump has boasted about the successful confirmations of Justices Neil Gorsuch and Brett Kavanaugh and his installation of over 200 judges to federal courts across the country, which many conservatives regard as one of his most signature accomplishments.