Democrats and their media allies were nearly unanimous: The Republican upset in the November Virginia gubernatorial election was a result of white supremacy.

It’s a common tune, one that more sober voices — even on the left — immediately dismissed for a more nuanced reality. The numbers following the election revealed something Democrats scramble to say they support, and still somehow failed to notice in this case: Diversity.

Above all, parents across Virginia, no matter their race, voted for Youngkin because they felt that he “honored their commitment to education,” Asra Nomani, vice president of strategy and investigations at Parents Defending Education, told the Daily Caller.

“Around the country and in Virginia, woke activists and educrats have launched a war on merit education and advanced learning,” Nomani said. “Many Asian, Hispanic and Black parents refused the narrative of minority parents who want education dumbed down.”

Vocal parents and teachers, a number of them minorities, came to school board meetings in the year leading up to the election, blasting critical race theory (CRT) in Virginia classrooms and policies against advanced learners. Terry McAuliffe, the Democratic Virginia gubernatorial candidate, said that the parents’ concern was a tactic “generated by Glenn Youngkin” and argued that parents had no right to tell schools what to teach in a debate a month before the vote. (RELATED: Virginia Education Department Promotes Pro-CRT Book, Despite McAuliffe’s Claims The Curricula Isn’t Taught In The State)

CRT holds that America is fundamentally racist, yet it teaches people to view every social interaction and person in terms of race. Its adherents pursue “antiracism” through ending merit, objective truth and the adoption of race-based policies.

Voters listened and gave Republicans control of every executive seat plus the House of Delegates. Youngkin received 50.57% of the vote, beating McAuliffe by over 2%.

Seventy-six percent of Youngkin voters said parents should have “a lot” of influence in school curriculums.

Youngkin scored a major victory in Virginia compared to 2020, when President Joe Biden received 54.1% of the vote in Virginia, nearly a 10-point margin over Trump.

Youngkin surpassed Trump in every single county in Virginia, and won 12 counties that Biden had taken in 2020. There was a seismic shift among moderate voters, as 14% swung to vote Republican compared to the 2020 election — McAuliffe had a 20% lead among moderates compared to Youngkin, whereas Biden led Trump by 34% in 2020.

Northern Virginia, where parents were most vocal about education at school boards, still voted majority blue, but by a smaller margin than in 2020. Biden got 61.9% of the vote in Loudoun County, compared to McAuliffe’s 55%. In Fairfax County, McAuliffe got 64%, whereas Biden received 69.9%.

Although poll data is inconclusive on who Latinos supported, the ones who voted for Youngkin voted for “a restoration of excellence, academic excellence, and merit,” Norma Margulies, founder of Hispanics for STEM in Fairfax County, told the Daily Caller. (RELATED: The Left May Lose Hispanic Voters Over CRT)

Seventy-two percent of parents said that CRT was important to deciding who to vote for, with 25% saying it was the single most important issue in their decision, according to a Fox News Voter Analysis survey. 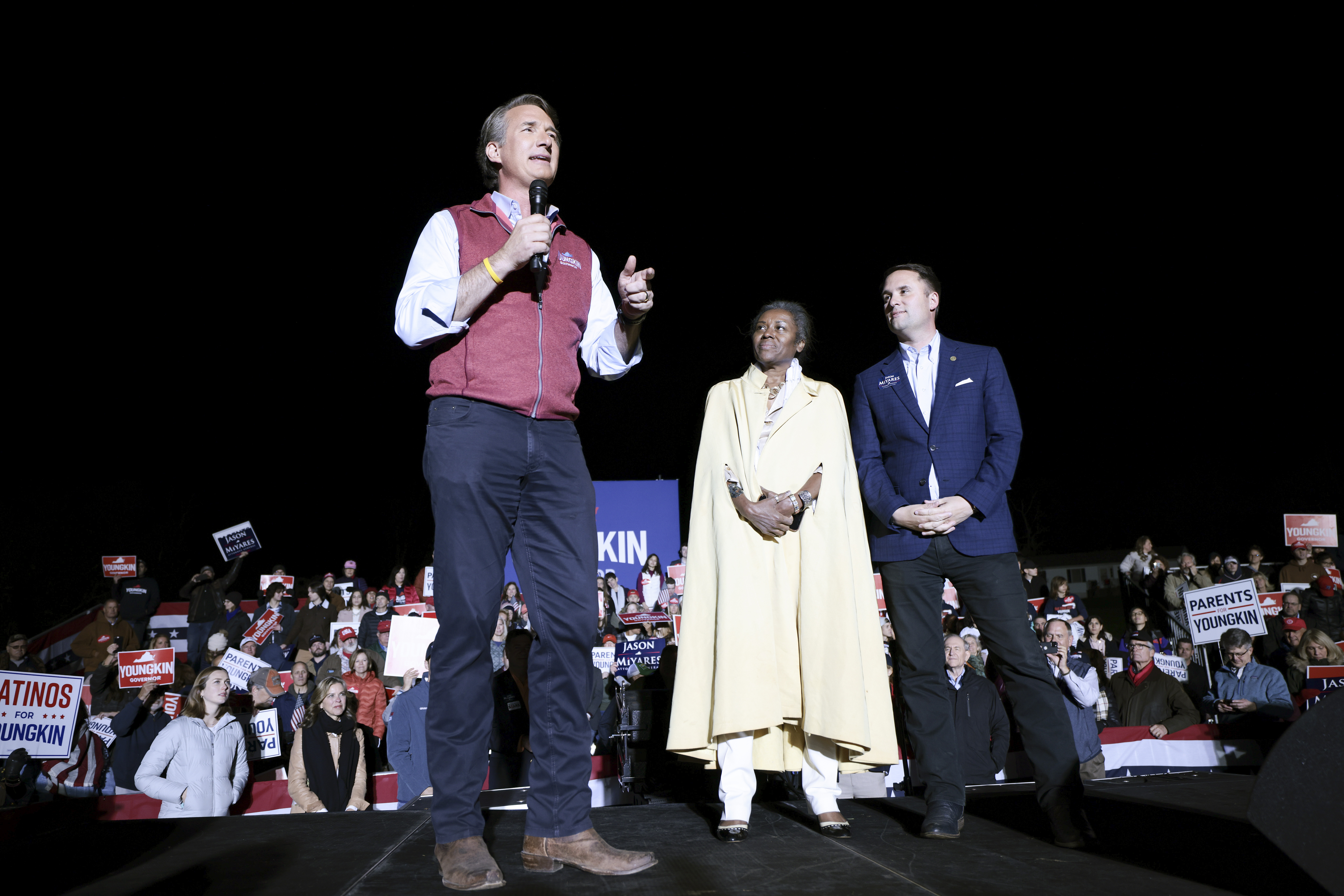 For some minority parents, the Democrats’ push for equity-based admissions, deception about CRT, including from McAuliffe himself, and the left’s war on “gifted students” were the key factors that swayed their vote for Youngkin.

The hot-button issue for minority parents in Fairfax County, Virginia, according to Nomani and Margulies, was the “discriminatory” removal of merit-based admissions to the top-ranking public school in the country.

Democratic school officials at Thomas Jefferson High School for Science and Technology (TJ) removed its race-blind admissions test in Oct. 2020 and replaced it with a more subjective admission process with the goal of increasing diversity. Diversity decreased as a result. In 2020, Asian students accounted for 73% of admissions, dropping to 54% in 2021. The amount of white students admitted increased from 18% to 22%.

Nomani, an Indian-American immigrant, is co-leading a lawsuit against TJ.
“The government should not choose who gets the opportunity to attend public schools based on that student’s race or ethnicity,” the website for the lawsuit states.
“This is an important battle not just for minority parents but for all people who believe in merit, hard work and the American Dream,” Nomani said, calling the new admissions process “racist” and discriminatory.
Harry Jackson, the first black president to be elected to the Thomas Jefferson Parent Teacher Student Association (TJPTSA), and TJ parent, agreed that the change to “equity” based admissions is only hurting minority students who need schools that focus on advanced learning.
“In the name of equity they have opted for removing those opportunities for advanced learners. They are moving towards de-facto privatization, where those opportunities are only going to exist,” Jackson told the Daily Caller.
School choice is a pivotal issue for the black community, which TJ’s new admissions policies go against by having geographical quotas, according to Jackson.
“Youngkin can garner more support from moderate and independent black and Hispanic communities that want to prioritize education and look for school choice options. Particularly the Asian communities who look for STEM” opportunities, Jackson said.
Jackson resigned from his position as president of the TJPTSA in October due to his opposition of CRT.

Margulies, a mother to a TJ student, said that “equity” policies enacted in Fairfax County have hurt Latinos looking for opportunities to increase their quality of education.
“Instead of allocating their funding on tutoring, school boards have focused on equity training, and hiring equity officers,” Margulies told the Daily Caller, noting that the six-figure salary of one equity officer would equal 3,333 hours of math tutoring.

CRT policies are also a “contradiction to what Latinos believe,” Margulies continued. (RELATED: Meet The Opponents Of Critical Race Theory The Media Does Not Want You To See)

The lost year of learning during school closures has angered parents across Fairfax County, according to Jackson.

“[The year of lost learning] had a disproportionate impact on Latino and black students in the community. We don’t know the second and third order effects of the lost learning as these kids get older,” Jackson told the Daily Caller, noting the lack of learning opportunities for students with special needs and the lack of virtual options available to students sick with COVID-19.

Many “minority families didn’t have access to technology,” and most parents didn’t have the privilege to work at home, Margulies agreed.

Parents also responded to the “deception” of school officials pushing “pornography” and “pedophilia” books in school libraries on the basis of “diversity,” according to Jackson.

McAuliffe vetoed a bill in 2016 that would have allowed parents to block sexually explicit books in schools, the Washington Post reported. Teachers would have had to inform parents of any “sexually explicit material” being presented in the classroom and give them the option to have their child opt out of the lesson.

Fairfax County Public Schools (FCPS) reviewed two books alleged by parents as pornographic and pedophilic and put them back in the district’s libraries in November. The books, “Gender Queer: A Memoir” by Maia Kobabe and “Lawn Boy” by Jonathan Evison, included illustrations of young boys appearing to have sex with older men.

“The decision reaffirms FCPS’ ongoing commitment to provide diverse reading materials that reflect our student population, allowing every child an opportunity to see themselves reflected in literary characters,” FCPS’s statement about the pornographic books said.