Republican Florida Rep. Matt Gaetz said he would run for President in 2024 if former President Donald Trump ultimately decides not to, according to a report from the New York Post.

“I support Donald Trump for president. I’ve directly encouraged him to run and he gives me every indication he will,” Gaetz told the New York Post on Wednesday. “If Trump doesn’t run, I’m sure I could defeat whatever remains of Joe Biden by 2024.”

Although the Florida congressman has not yet formally launched an exploratory committee, a source told the New York Post that Gaetz has “clearly been vetted and smeared like a presidential candidate.”

The source also said that a Gaetz presidential bid would be “beneficial” to Republican Florida Gov. Ron DeSantis, should the latter choose to toss his hat into the 2024 race as well.

Gaetz, who has been representing Florida’s first congressional district since 2017, is currently under investigation for allegations of sex trafficking, as well as other misconduct.

Gaetz has repeatedly denied these accusations. “Once again, the office will reiterate, these allegations are blatantly false and have not been validated by a single human being willing to put their name behind them,” Gaetz’s office previously told the Daily Caller. (RELATED: Rep. Matt Gaetz Says He Is Subject Of Sex Investigation, But Claims He’s The Target Of An ‘Extortion’ Plot) 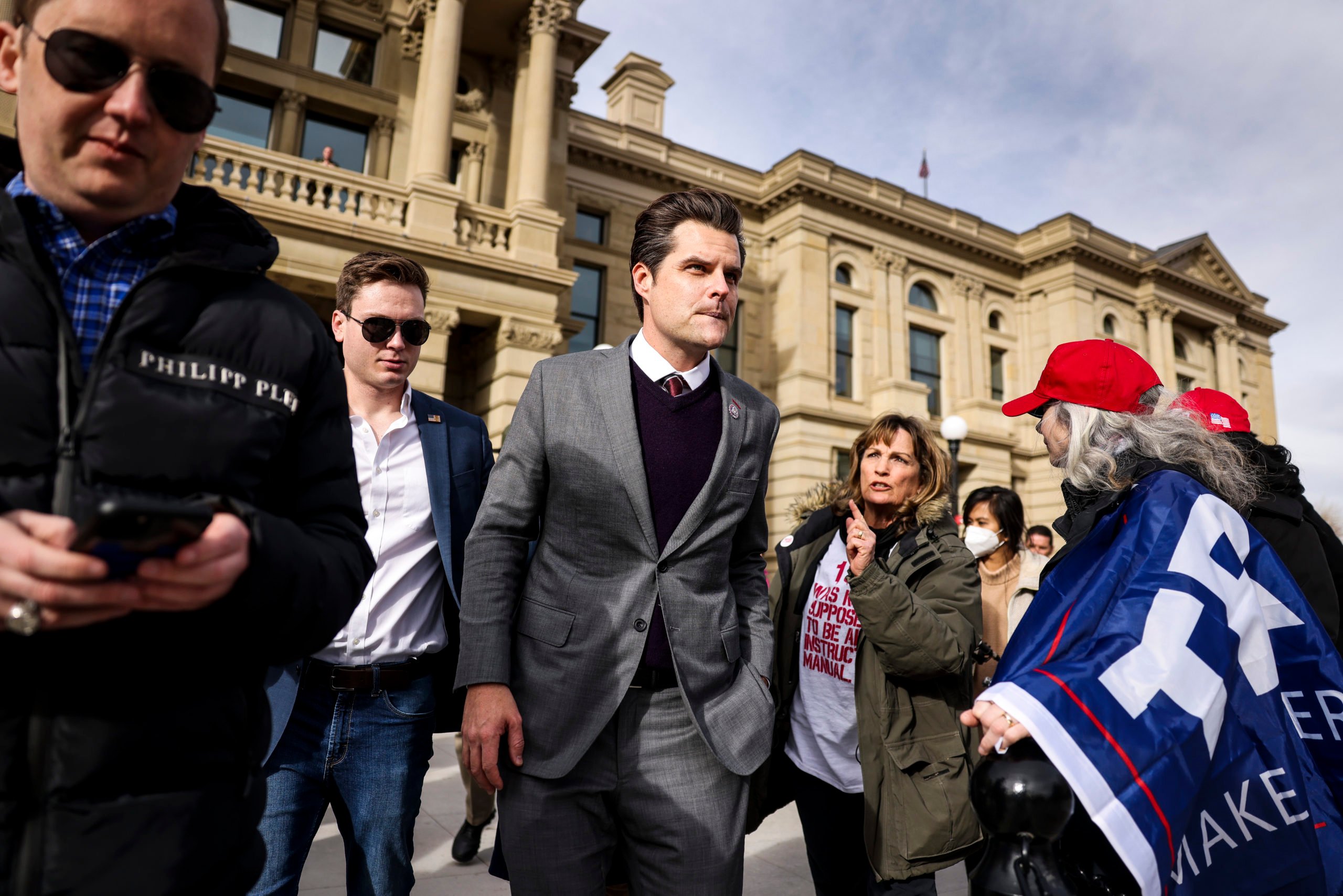 CHEYENNE, WY – JANUARY 28: Rep. Matt Gaetz (R-FL) leaves the Wyoming State Capitol after speaking to a crowd during a rally against Rep. Liz Cheney (R-WY) on January 28, 2021 in Cheyenne, Wyoming. Gaetz added his voice to a growing effort to vote Cheney out of office after she voted in favor of impeaching Donald Trump. (Photo by Michael Ciaglo/Getty Images)

The Florida congressman has risen to national prominence for his staunch support of Trump, having adopted many of Trump’s populist proclivities.

Earlier this month, Gaetz appeared alongside Republican Georgia Rep. Marjorie Taylor Greene for rallies in Mesa, Arizona and The Villages in Florida, as part of their “America First Tour,” attracting more than 1,000 attendees, according to the NY Post.

With these public appearances, the congressman said he intended to “rally the 74 million Americans that voted for President Trump in the last election and highlight the destructive failings of the radical left and their puppet in the White House, Joe Biden.”

Gaetz was also a vocal opponent of Wyoming Republican Rep. Liz Cheney, having spoken out against her impeachment of the former president. In January, Gaetz traveled to Wyoming to campaign against Cheney at Wyoming’s Capitol building in Cheyenne.

“It’s the establishment against the rest of us,” Gaetz said of Cheney during the rally.

Trump has said that he is waiting for the “right time” to make his announcement regarding whether he will run for president again in 2024.

“I think people are going to be very, very happy when I make a certain announcement,” the former president teased earlier this month.