The Biden administration has consistently implemented policies against the U.S. fossil fuel industry — nixing pipelines and ditching drilling projects, pursuing burdensome regulations and delaying the key federal oil and gas permit program — as part of its aggressive climate agenda. Meanwhile, the U.S. has become increasingly reliant on oil imports, including those from Russia, and Russia has established itself as a major player in global natural gas markets.

The U.S., though, is set to return to being a net importer of crude oil in 2022 under the Biden administration, according to federal projections. The nation became a net exporter of total energy in 2019, factoring in both coal and natural gas trade, and a net oil exporter in 2020.

“Vladimir Putin has had a chance to see if the Biden administration was going to continue to be aggressive in his support of the United States oil and gas industry,” Institute for Energy Research (IER) President Tom Pyle told the Daily Caller News Foundation in an interview. “Every action that this administration has taken with respect to energy and oil and gas has been the opposite.”

“The administration is sending a signal to both the market and to Vladimir Putin that the United States is not serious about utilizing its God-given natural resources,” he added. (RELATED: ‘Entire World Is Watching’: Manchin Joins Calls For Russian Oil Import Ban) 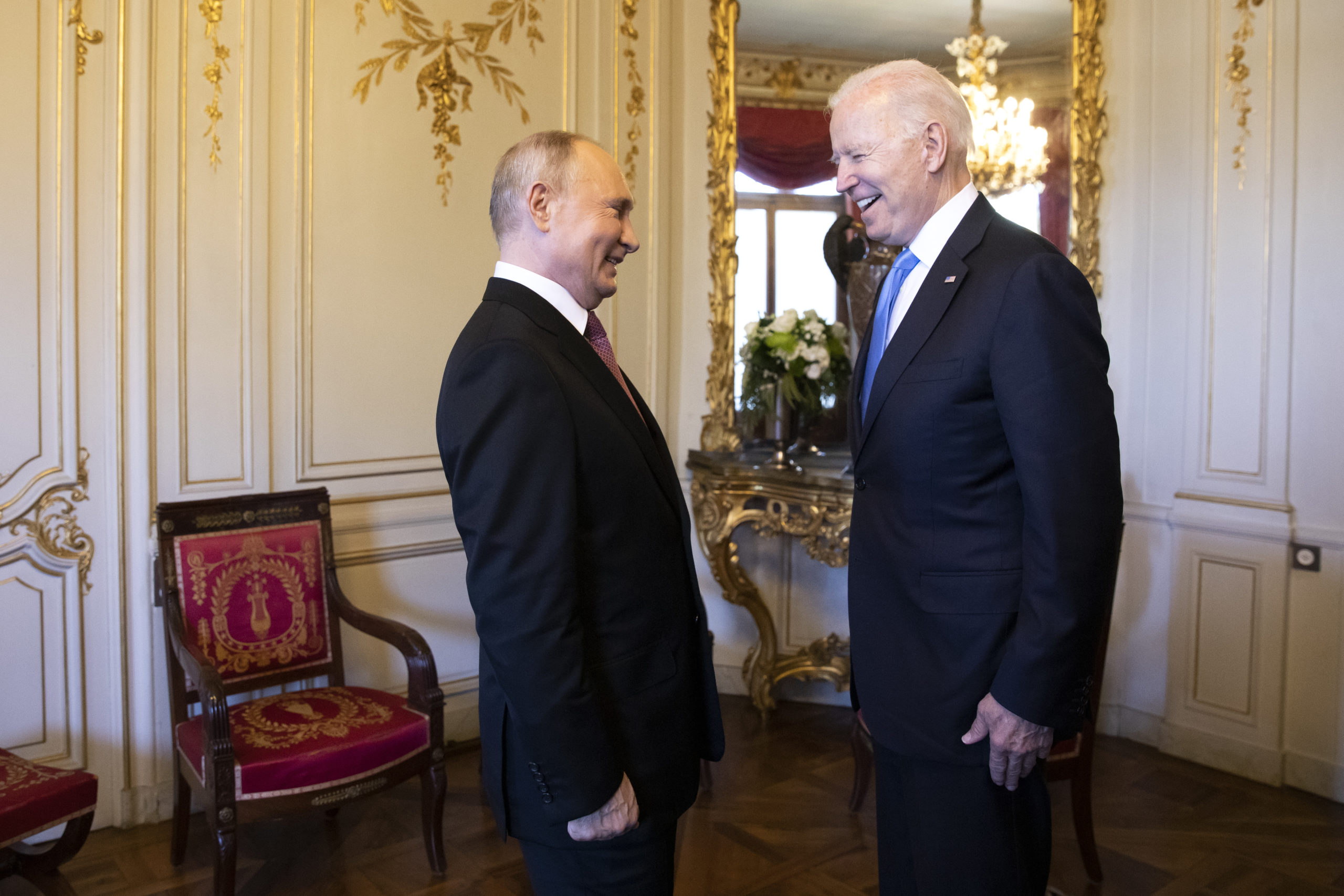 Russia provided more oil to the U.S. than any other country except Canada in 2021, U.S. Energy Information Administration full-year data showed. In total, the U.S. imported nearly 244.5 million barrels of oil, or roughly 670,000 barrels per day, from Russia in 2021.

Russia, which exported nearly 65% of the 10.5 million barrels of crude oil per day it drilled in 2020, is Europe’s largest oil supplier as well. Europe is also dependent on Russia for natural gas supply.

“We’ve got to have serious people involved in energy policy and I’m afraid that, based on everything I’ve seen so far, the Biden administration plans to double down on this silly nonsense — the notion that we can just shift over to wind and solar and expect it to be the answer,” he said. 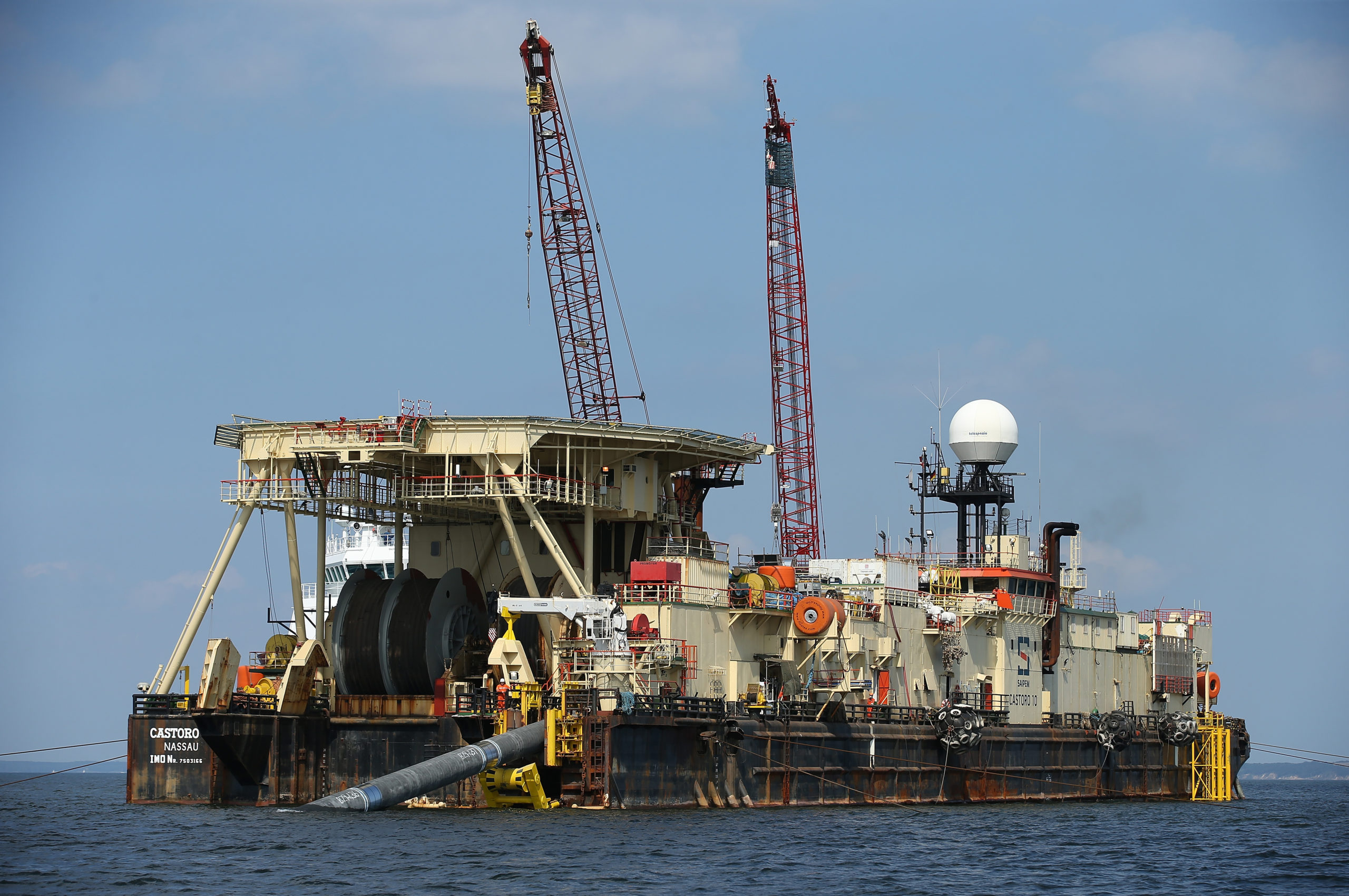 The Castoro 10 pipelay vessel lays concrete-coated pipe for the Nord Stream 2 gas pipeline onto the seabed of the Baltic Sea on Aug. 16, 2018 near Lubmin, Germany. (Sean Gallup/Getty Images)

‘A geopolitical and economic asset’

Among Biden’s first actions as president was to revoke the Keystone XL pipeline’s federal permit, which would have transported more crude oil into the U.S. from Canada. The administration also abandoned the Willow Project, a significant oil and gas project in Alaska approved by the Trump administration that would have produced 100,000 barrels of oil per day.

After a federal judge ordered the Biden administration to halt its attempted ban on new federal land drilling leases, the Department of the Interior has dragged its feet and defied multiple court-ordered deadlines to restart the program. The Interior Department also signaled it would choose not to appeal a recent ruling that prohibited an offshore drilling lease in the Gulf of Mexico the agency facilitated in the fall.

Federal regulators appointed by Biden have also pursued a series of policy changes involving natural gas, proposing a rule to prohibit it from being transported via rail car and adding climate roadblocks for new pipeline permits. In a letter to the Biden administration on Monday, 25 state attorneys general announced their opposition to the rail car rule, saying it was important in facilitating greater natural gas exports to allies.

“It’s sending a signal that we are not interested in increasing our shipments of natural gas to Europe,” Pyle told the DCNF. 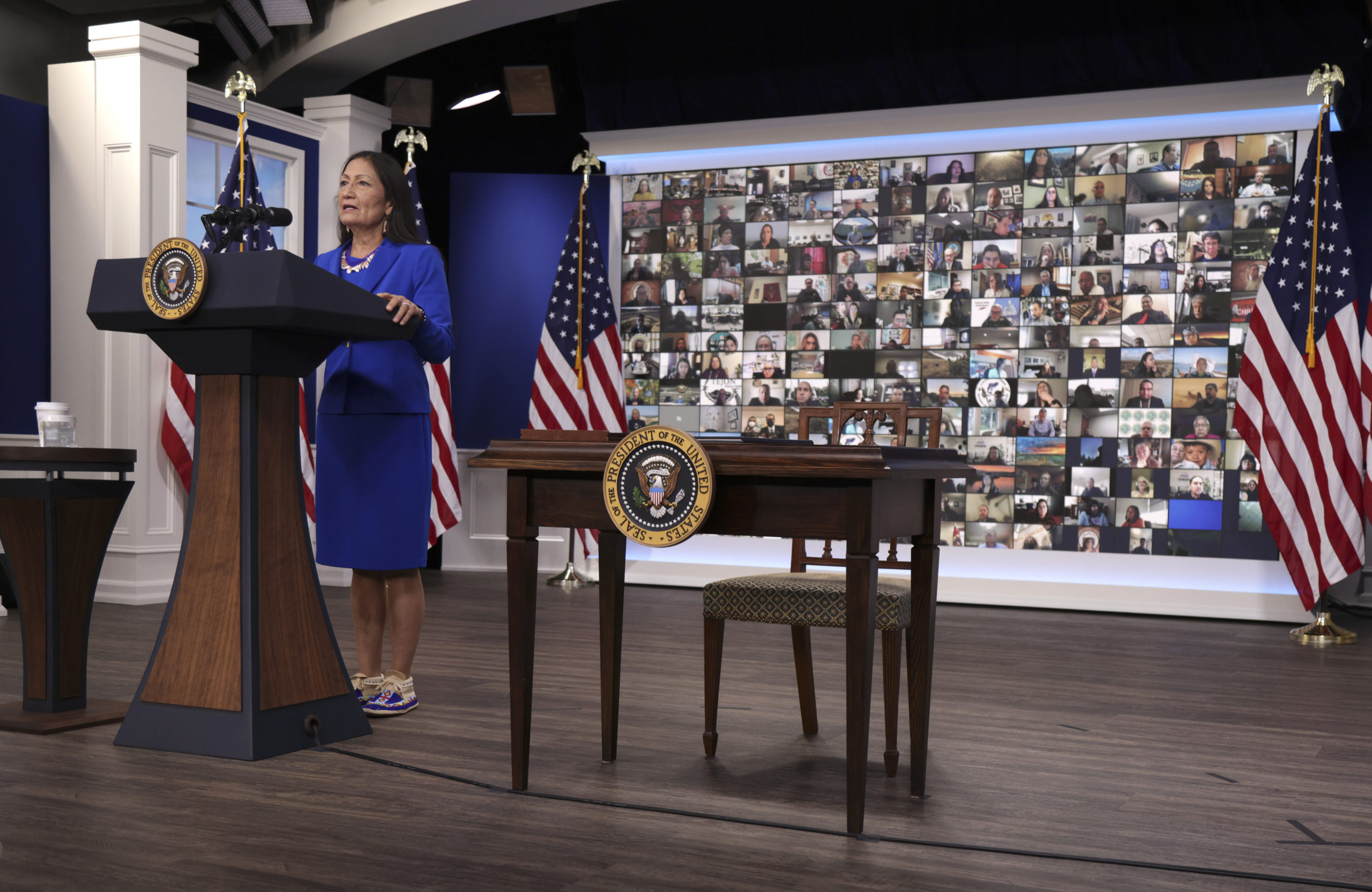 “With oil prices now pushing $100 per barrel and Russia dependent on energy sales to fund the government’s budget—including its military and the invasion of Ukraine—the leverage Russia’s energy exports exert over the West is now on display for the world to see,” Martin Durbin, the president of the Chamber of Commerce’s Global Energy Institute, wrote in a blog post Tuesday.

“This reality is forcing urgent reconsideration of energy policies that contribute to this dependence,” he added.

Durbin argued the administration should accelerate oil and gas leasing and develop a five-year lease exploration program. He also said the administration should reverse its recent pipeline policy change and approve the permits for six new and expanded natural gas export terminals which have been awaiting certification and which would increase U.S. export capacity by 25% at a time when Europe is looking to become less dependent on Russia.

The Global Energy Institute head added that Biden can release $300 million in funding the U.S. promised in 2020 for the Three Seas Initiative, a plan to support Europe’s expansion of natural gas infrastructure. The U.S. LNG Association led a coalition letter to Biden on Friday, asking for him to release the funds immediately.

But instead of pushing domestic producers to drill more, the administration has repeatedly asked the Organization of the Petroleum Exporting Countries (OPEC) to increase its production. On Feb. 4, White House press secretary Jen Psaki said Biden had conveyed “clearly to OPEC member countries and suppliers that it’s important to meet the demand on the market.”

In October, senior White House energy adviser Amos Hochstein suggested that Russia could use its natural gas supplies as a geopolitical weapon against Europe.

“The only supplier that can really make a big difference for European energy security at the moment for this winter is Russia,” Hochstein said 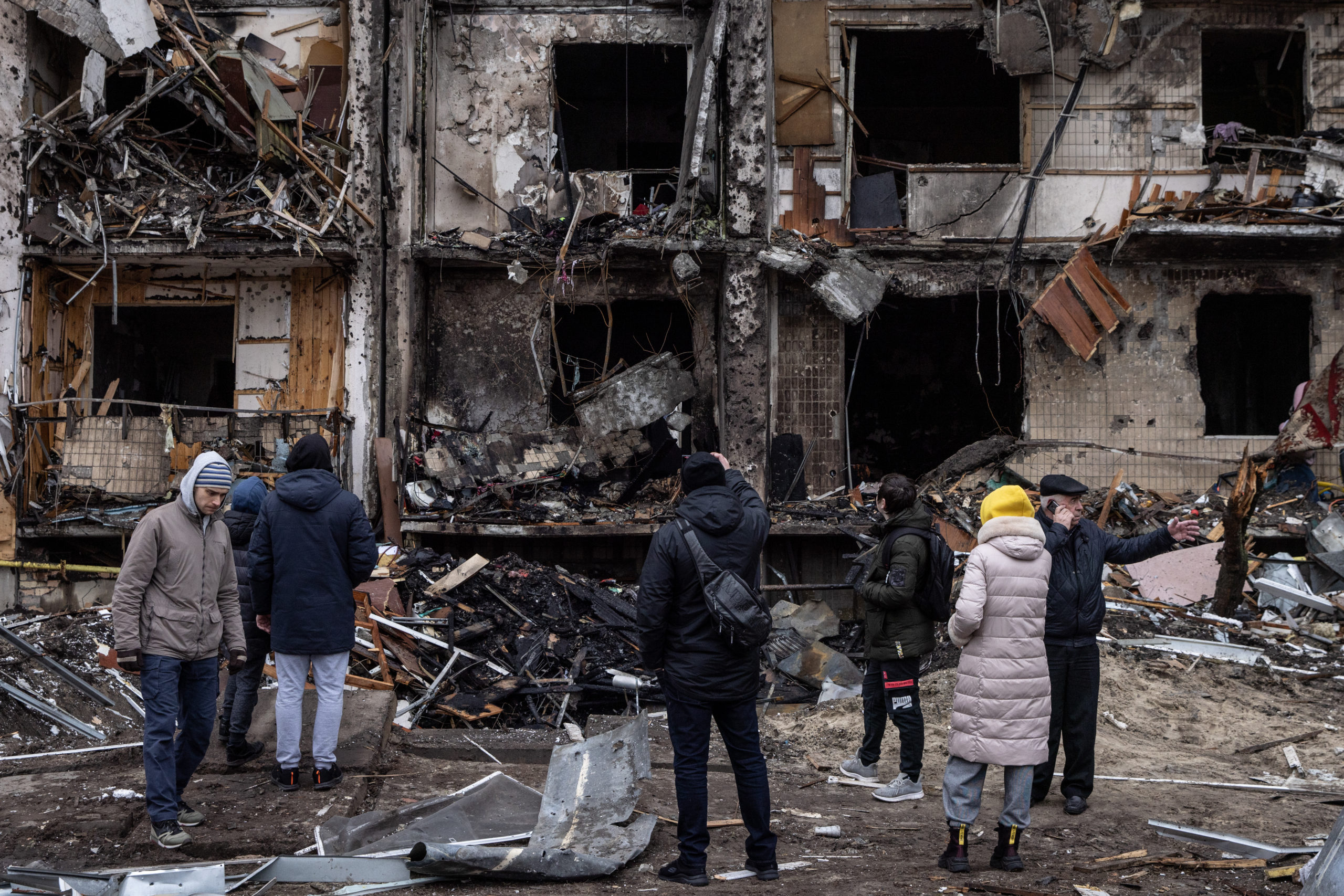 People look at the exterior of a damaged residential block hit by an early morning missile strike on Feb. 25 in Kyiv, Ukraine. (Chris McGrath/Getty Images)

“(Putin) gains power by doing so, and it’s what funds his military and aggressive behavior,” they added. “To counter Putin, our bill flips the switch to promote American energy jobs, production, and exports.”

In addition, the president has opted to heed the advice of several House and Senate Democrats, announcing that he would order the Energy Department to tap the emergency oil stockpile along with allies on Tuesday. The U.S. will extract 30 million barrels of oil from its reserve while dozens of other countries will tap the same amount total from their respective stockpiles.

The administration has yet to lay out a plan for restocking the emergency oil reserve. (RELATED: Biden Administration Defies Court Ruling Again, Opts Against Holding Oil Drilling Sales)