Many lawmakers who have ordered or urged citizens not to leave their homes due to the coronavirus pandemic have not followed their own advice.

The Daily Caller News Foundation has kept track of those politicians or local lawmakers who spurned their own COVID-19 rules to attend President Joe Biden’s inauguration and the lawmakers who flouted their own advice and then excused their behavior as essential, compiling lists of the biggest offenders such as Democrats New York Gov. Andrew Cuomo, New York City Mayor Bill DeBlasio, D.C. Mayor Muriel Bowser, House Speaker Nancy Pelosi and many more.

The DCNF searched for, but did not find, examples of prominent Republicans who urged citizens to stay home due to COVID-19 and then did not follow their own advice. Republican Texas Sen. Ted Cruz, for example, sparked a backlash when he traveled to Cancun in February as Texans struggled without power under heavy ice storms.

Cruz, who has mocked over zealous mask measures and publicly supported a salon owner jailed for violating COVID-19 restrictions, later said the trip was “obviously a mistake” and that he had a responsibility to stay with Texans during the severe weather.

Whitmer sparked a backlash in April when outlets reported she had traveled to Florida in March to visit her father. Shortly after her trip, she appeared on “Meet the Press” and urged people to “take this seriously, mask up” and “get tested” — and to specifically avoid spring break in Florida. (RELATED: Whitmer: March Trip To Florida Was To Help Father, ‘Not A Vacation’)

Her spokeswoman refused to confirm to the DCNF at the time that the governor’s trip was to Florida, but noted that Whitmer had left the state three times in the past six months: twice to Washington, D.C., to attend Biden’s inauguration and to visit Michigan’s National Guard troops, and once to visit her “elderly father who is battling a chronic illness.”

“All trips were very brief, two full days or less, closely followed public health guidelines, and were made when Michigan’s daily positivity rate was in the low single digits,” Whitmer spokeswoman Tiffany Brown told the DCNF. (RELATED: These Democratic Leaders Spurned Their Own COVID-19 Rules To Attend The Inauguration) 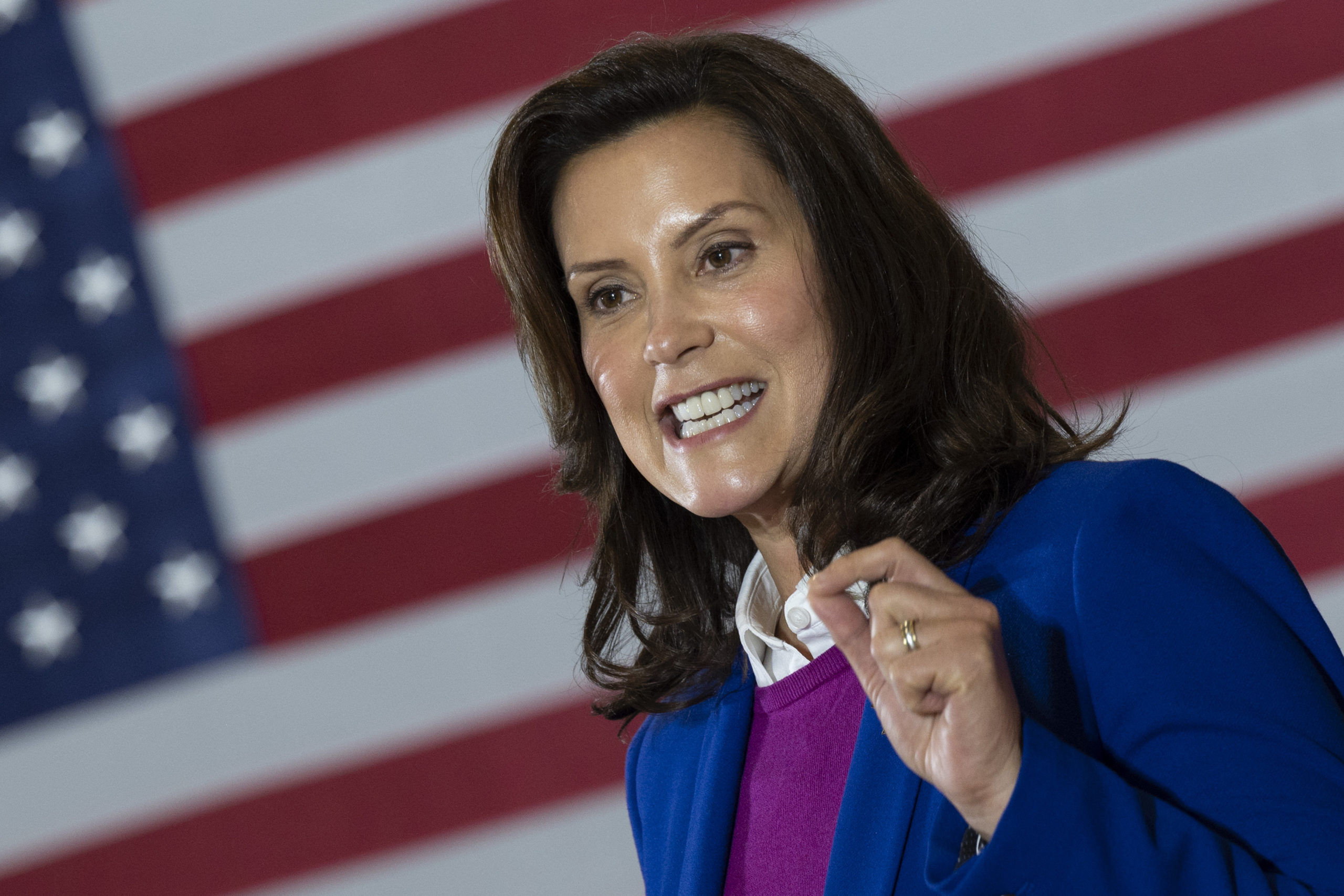 The governor further addressed the matter Wednesday, saying during a press conference that her visit was a “quick” weekend trip.

“Like a lot of children of parents who have health issues or relative who have health issues, I showed up when I was needed,” she said. “I did a lot of cooking, a lot of cleaning. I also did my day job, meaning I was on regular calls and conferences with my team. I didn’t miss any of that work, as well. When you’re the governor of Michigan, you’re always on the clock, but it doesn’t mean that you’re not also a daughter who shows up when a family member needs her.”

In January, Whitmer also went to Biden’s inauguration, which the Washington Post estimated was attended by about 2,000 people, after issuing a “gatherings and face mask order” requiring Michigan residents to limit their gatherings to 25 or fewer people.

Early on in the pandemic, Democratic New York City Mayor Bill de Blasio visited his local YMCA hours before Cuomo shut down all gyms in the state as COVID cases escalated in March.

De Blasio’s office said the mayor wished to visit the YMCA one more time before it was shut down, saying: “The YMCA has been a huge part of his and his family’s life, like it has been for a lot of New Yorkers. It’s clear that’s about to change and before that, the mayor wanted to visit a place that keeps him grounded one last time.”

Chicago Mayor Lori Lightfoot urged citizens to stay at home in accordance with COVID-19 restrictions until she needed to get a haircut. Following massive backlash, she defended her haircut, saying, “I’m the public face of this city and you know, I’m a person who [takes] personal hygiene very seriously and I felt like I needed to have a haircut. So I got a haircut.”

Lightfoot also urged citizens to cancel their Thanksgiving plans, though she was seen celebrating with large crowds following news that Biden won the presidential election.

Democratic Speaker of the House Nancy Pelosi attended a hair appointment in San Francisco in late August, though indoor hair salons in the California city were currently closed due to the coronavirus pandemic. Pelosi, who did not wear a mask during at least part of the appointment, later accused the hair salon of setting her up.

Pelosi also canceled an in-person dinner for newly elected House Democrats after backlash over hypocrisy of the indoor event.

Democratic California Gov. Gavin Newsom was photographed dining indoors at the Michelin-starred French Laundry on the evening of Nov. 6 after urging California residents to wear face masks “in between bites.” He later apologized and called the party a “bad mistake.”

Philadelphia, Pennsylvania, Mayor Jim Kenney was photographed dining indoors without a mask in Maryland in late August while indoor dining was prohibited in his home city.

Democratic Virginia Gov. Ralph Northam was caught without a face mask at Virginia Beach in May while he was weighing a statewide order requiring citizens to wear masks. The governor’s office later explained that Northam was “not expecting to be within six feet of anyone.”

Democratic California Sen. Dianne Feinstein was filmed chatting with her aides maskless in the corridors of a government building before entering a mid November hearing. Feinstein has advocated for a nationwide mask mandate and attempted to prevent coronavirus funding going to states that would not adopt this mandate.

A bipartisan group of lawmakers traveled to Hawaii in mid November for the annual Independent Voter Project conference — a trip that drew criticism from those who said the lawmakers should not be at a resort amid rising coronavirus cases. The group included both Republican and Democratic California assembly members.

After telling New Yorkers to “stay away” from their loved ones, Democratic New York Gov. Andrew Cuomo said that his mother and his daughters would be coming to his home for Thanksgiving. After massive backlash, the governor’s office told the DCNF that he would be busy on Thanksgiving and would not be at home.

Democratic Oregon Gov. Kate Brown, who cheered massive Black Lives Matter protests, told citizens to “uninvite” family members and loved ones ahead of Thanksgiving, tweeting: “This is hard, but making difficult sacrifices now will save lives. This Thanksgiving, keep it small. Uninvite them.”

Williamson County Judge Bill Gravell plead guilty and will pay a fine of $1,000 for violating the stay-at-home order he enacted in April after he was caught on camera attending his grandson’s birthday party, his attorney announced in late November.

Democratic Denver Mayor Michael Hancock warned citizens to “avoid travel” in a tweet only 30 minutes before he boarded a flight to travel to his family for Thanksgiving. The mayor later told the city’s board of ethics that though his Thanksgiving travels were a mistake, they were not a violation of the city’s ethics.

Democratic San Jose, California, Mayor Sam Liccardo attended a Thanksgiving party with family members who were not part of his own household after telling citizens to “cancel big gatherings this year.”

Los Angeles County Supervisor Sheila Kuehl, who voted to ban outdoor dining in November and called eating outdoors a “most dangerous situation,” was seen dining outside at the Santa Monica restaurant Il Forno Trattoria. Kuehl later admitted she was dining “on the very last day it was permissible.”

Democratic San Francisco, California Mayor London Breed dined in a semi-enclosed room at the French Laundry restaurant in early November. Eight people attended the party in a partially enclosed room with a ceiling and chandelier — the same kind of room that Newsom infamously dined in on the evening of Nov. 6.

Three days after Breed dined at the French Laundry, she banned indoor dining in the city of San Francisco.

Austin Mayor Steve Adler hosted 20 guests at an outdoor wedding and reception for his daughter in early November and then boarded a private jet the next day to fly to Cabo San Lucas, Mexico, for vacation. In a Facebook video message to Austin residents, Adler urged Texans to “stay home if you can,” warning, “This is not the time to relax. We are going to be looking really closely.… We may have to close things down if we are not careful.”

Democratic New York City Mayor Bill de Blasio rang in the new year by dancing with his wife in Times Square — which was empty, since he had closed it off to the public. Times Square typically hosts tens of thousands of people every New Years Eve to watch the ball drop.

Democratic Rhode Island Gov. Gina Raimondo was photographed in December drinking at a wine bar four days after she reminded citizens to comply with coronavirus restrictions and stay home except for essential activities.

The day after Thanksgiving, White House Coronavirus Task Force Coordinator Dr. Deborah Birx traveled to one of her vacation properties after telling Americans that celebrations should only include “your immediate household” and despite a warning from the Centers for Disease Control and Prevention (CDC) that Americans should not to travel over the holiday.

Democratic Washington Rep. Pramila Jayapal called out Republican lawmakers for not wearing masks while pro-Trump rioters stormed the U.S. Capitol on Jan. 6, but video later showed Jayapal maskless for at least two and a half minutes while sitting in the House gallery with members of Congress and staff.

President Joe Biden faced criticism after he appeared maskless at the Lincoln Memorial after signing an executive order mandating that masks be worn on federal property. White House Press Secretary Jen Psaki later said that Biden had been celebrating his inauguration and had taken other precautions, noting that there were “bigger issues” to address than whether or not Biden was wearing a mask.

Democratic Pennsylvania Gov. Tom Wolf attended Biden’s inauguration in D.C. after his administration strongly urged Pennsylvania residents during the holidays to avoid leaving their houses. Pennsylvania’s current COVID-19 response also reminds residents that “unnecessary travel should be limited” and requires those entering the state to have a negative coronavirus test result or quarantine for 10 days.

His office told the DCNF at the time that his trip was “classified as essential travel and not subject to the travel advisory, as it is pursuant to his official duties as Governor.”

The governor previously came under fire in June when he said he couldn’t “imagine” telling protestors to stay home during the coronavirus pandemic.