Roughly 20 candidates announced they’re running for president in 2020, with many more waiting in the wings for just the right time to launch a formal campaign.

Democratic heavyweights, newcomers and no-names are champing at the bit to face President Donald Trump in 2020, and he could face competition from the right as well.

Here’s a list of major presidential hopefuls who are in the race or on the fence:

Democratic Colorado Sen. Michael Bennet announced May 2 he is entering the already-crowded 2020 field. Bennet is expected to make health care a big part of his presidential platform, but he is not a supporter of Medicare for all. Bennet envisions “Medicare-X,” a public option that does not eliminate private health insurance.

Former Vice President Joe Biden might be the biggest name to declare a 2020 Democratic run. After a lot of apologizing for his past, he launched his campaign April 25. Biden had already come out swinging against his rivals, declaring March 16 he has “the most progressive record of anybody.” 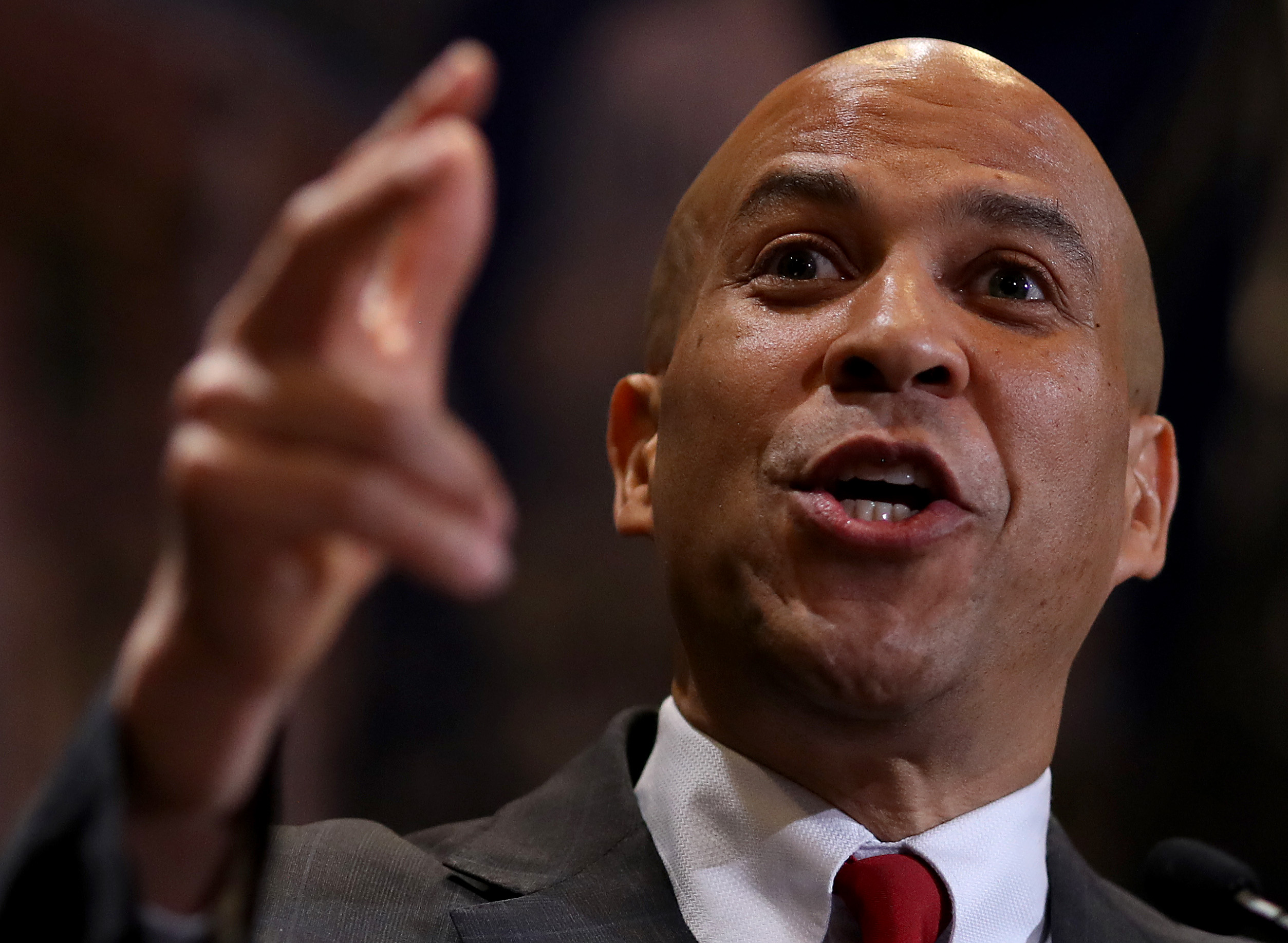 Democratic New Jersey Sen. Cory Booker announced he was running for president Feb. 1. He’s held the office since 2013. Booker, a progressive, signed onto Sanders’s Medicare for All proposal and praised the Green New Deal. (RELATED: Pelosi And Co Unveil Their Own Health Care Fixes As Party’s Far Left Rallies To Medicare For All)

Democratic Montana Gov. Steve Bullock announced his run May 14, touting his bipartisan record as a blue governor in a red state that Trump won handily in 2016.

Pete Buttigieg, mayor of South Bend, Indiana, had low name recognition when he jumped into the race Jan. 23, but has garnered more attention on social media for his affable “Mayor Pete” persona. Buttigieg even enjoyed third place in a poll of Iowa voters conducted in late March. He’s a progressive Democrat and wants to be the nation’s first openly gay president. 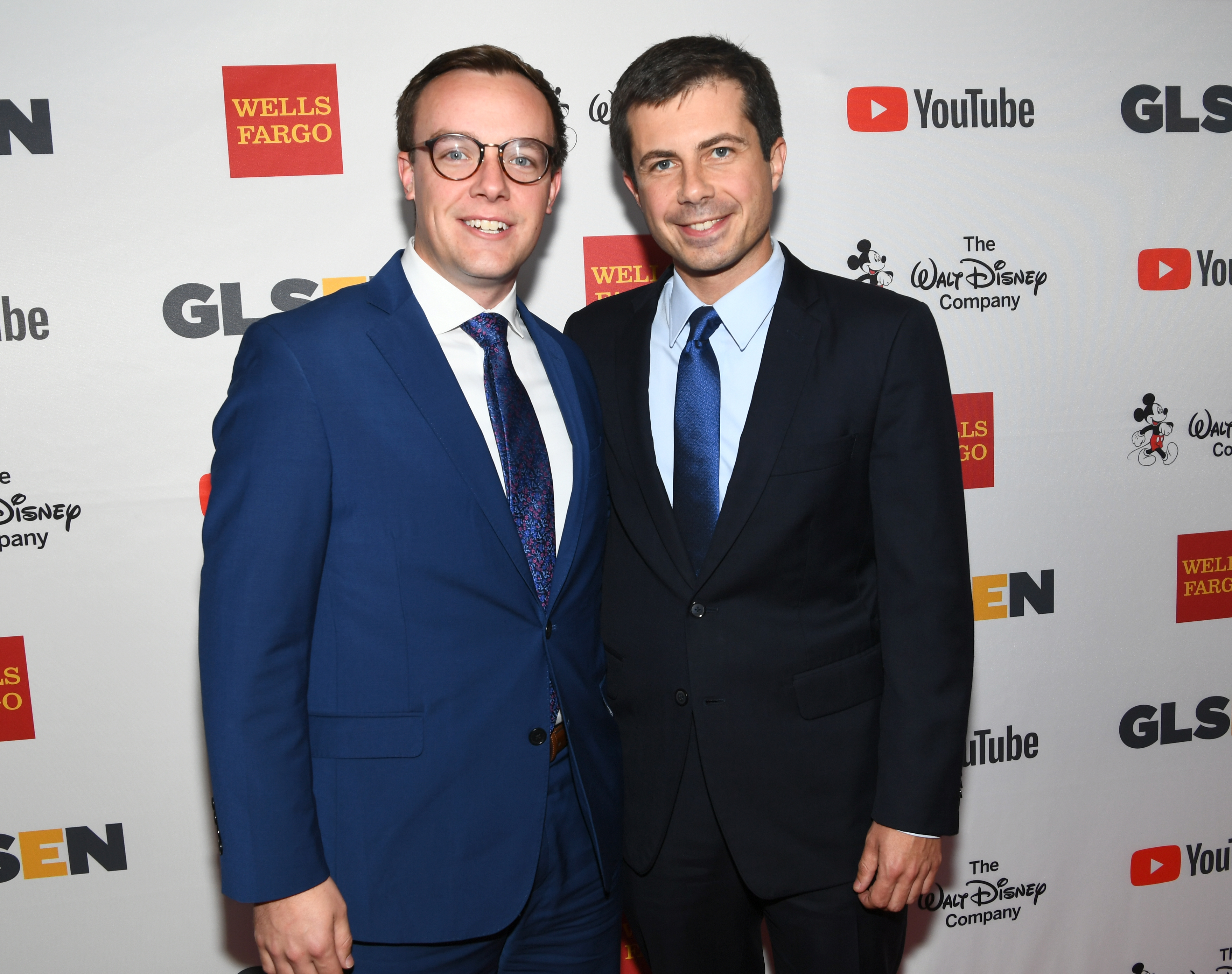 Chasten Glezman (L), and Mayor Peter Buttigieg at the 2017 GLSEN Respect Awards at the Beverly Wilshire Hotel on October 20, 2017 in Los Angeles, California. (Photo by Emma McIntyre/Getty Images for GLSEN)

Former Housing and Urban Development Secretary Julian Castro announced he was running as a Democrat on Jan. 12. He has been a vocal critic of Trump, blaming him for divisiveness in today’s political climate.

Democratic New York City Mayor Bill de Blasio announced his presidential run May 16 after teasing it for weeks. He visited the early-voting state of New Hampshire in March, but one of his events drew only six supporters.

Former Democratic Maryland Rep. John Delaney announced his run early in July 2017. He has painted himself as a unifying candidate who wants to focus on bipartisan issues like criminal justice reform, the opioid crisis and infrastructure.

Democratic New York Sen. Kirsten Gillibrand announced her run in mid-March and delivered her kickoff speech in front of the Trump International Hotel in New York City on Sunday. Gillibrand has portrayed herself as a voice for women but has faced backlash after her office was accused of botching the handling of sexual misconduct allegations involving two different male staffers. 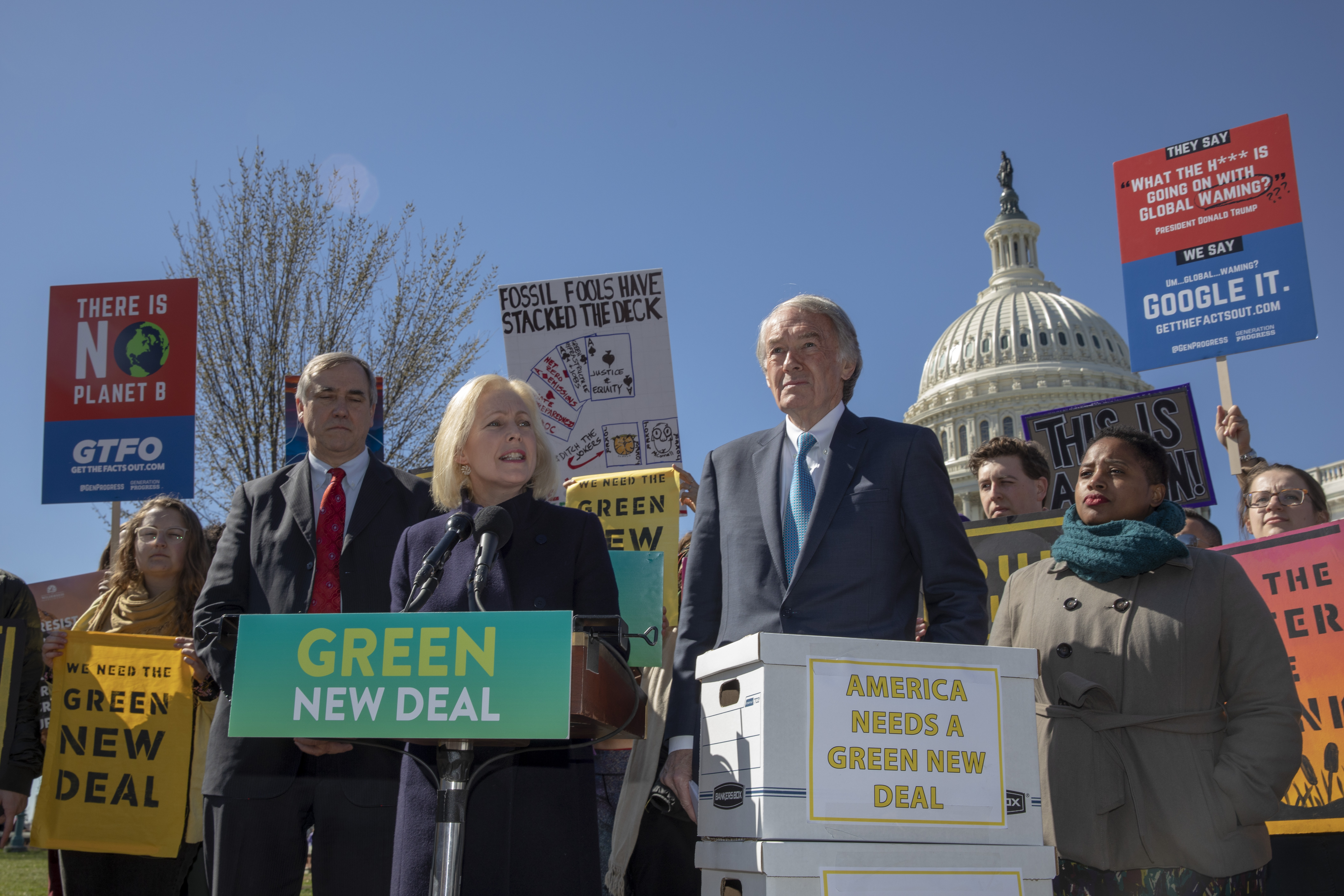 California Democratic Sen. Kamala Harris was in the top tier of Democratic frontrunners even before she announced her candidacy Jan. 21. Harris, a former prosecutor, has taken up the progressive mantle, but some of her critics on the left find her past too problematic, as detailed in this opinion piece in The New York Times. Like many farther on the left, she supports Sanders’s Medicare for All plan and the Green New Deal.

Former Democratic Colorado Gov. John Hickenlooper announced his run March 4 and could have an uphill battle as a moderate trying to gain name recognition among a field of candidates farther to the left. He has already made a few awkward missteps in his campaign — Hickenlooper said he accidentally took his mother to an X-rated film (and stayed) during a CNN town hall.

Democratic Washington Gov. Jay Inslee announced he was running as a “climate candidate” March 1. Inslee has said he would declare a climate emergency should Congress fail to pass global warming legislation. He also declined to endorse the Green New Deal, saying it is “not a policy document” and “people like me will issue policies to actually put meat on the bones.”

Democratic Minnesota Sen. Amy Klobuchar launched her bid Feb. 10 and has tried to distance herself from self-described socialists in her party like Sanders. She does not support ideas like taxpayer-funded college tuition for all. Klobuchar announced a big part of her 2020 platform Thursday: $650 billion in federal funds for an infrastructure plan that includes repairing roads and bridges, public schools and expanding broadband internet access, reported The Wall Street Journal. 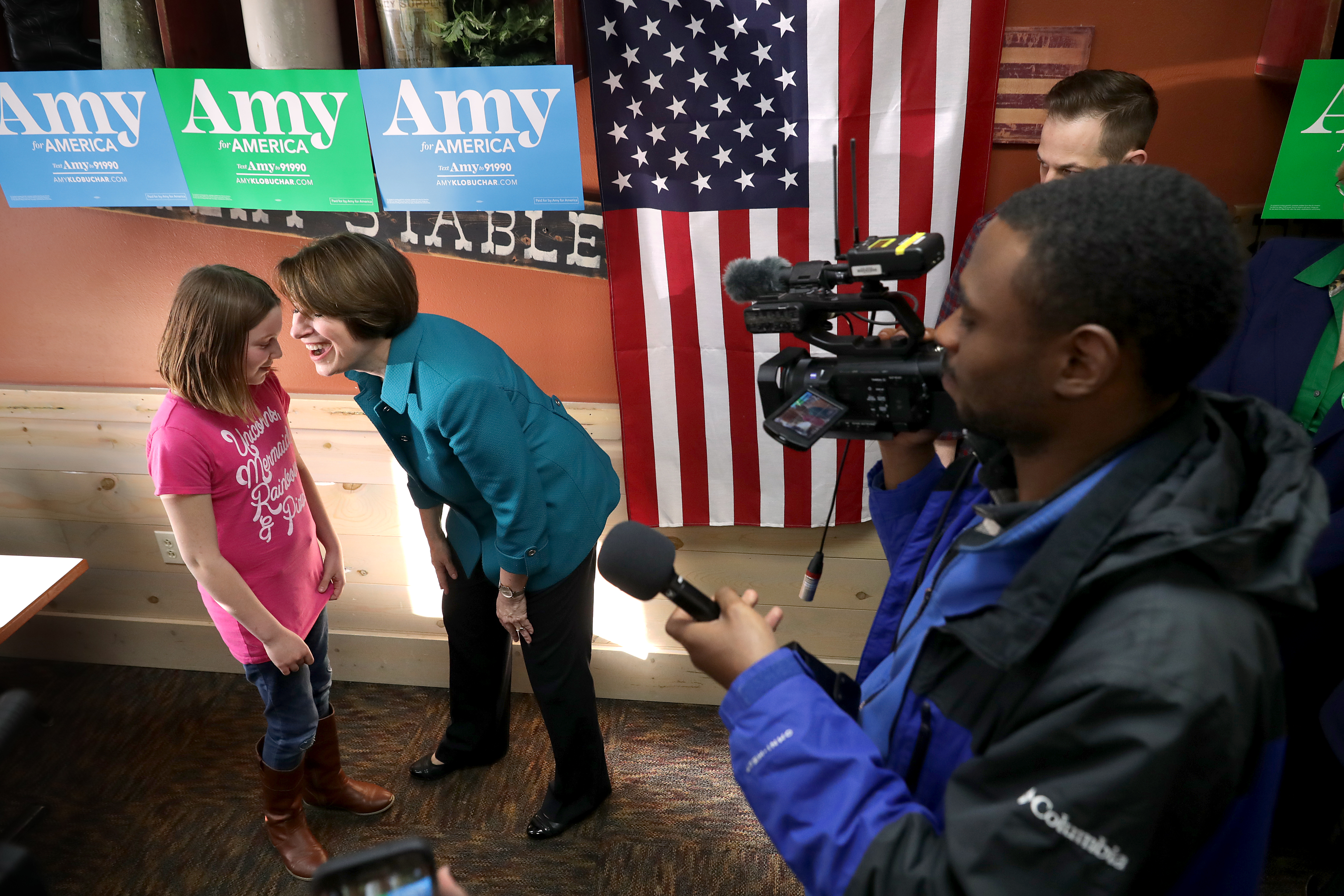 Democratic Massachusetts Rep. Seth Moulton announced his 2020 presidential run April 22. The congressman has served Massachusetts’ 6th Congressional District since 2015 and is known for opposing Democratic California Rep. Nancy Pelosi as speaker of the House after the 2018 midterm elections.

Former Democratic Texas Rep. Beto O’Rourke burst onto the 2020 scene with a record-breaking $6.1 million in campaign donations after announcing his candidacy March 14. But the television-ready Democrat, who’s most well-known for losing his Senate challenge to Texas Republican Ted Cruz in 2018, has been criticized for his lack of tangible policy proposals.

Democratic Ohio Rep. Tim Ryan, who is playing up his centrist label, announced he was running for president on daytime talk show “The View” April 4.

Some diehard fans of Bernie Sanders, an Independent who is seeking the Democratic nomination, still feel he got an unfair shake at the 2016 Democratic convention. The socialist candidate is back and declared he was starting a “political revolution” with his campaign Feb. 19. He led other 2020 contenders in Day 1 campaign cash hauls with $5.9 million until O’Rourke surpassed his record.

Democratic Massachusetts Sen. Elizabeth Warren announced her run Feb. 9. The former Harvard Law School professor has painted herself as the candidate with specific policy proposals, including a plan to break up big tech companies like Facebook, Google and Amazon. Should she secure the Democratic nomination, Trump will likely dredge up his “Pocahontas” nickname for her that played into her decision to make an ill-received announcement about her Native American heritage.

Former Massachusetts Republican Gov. Bill Weld announced his primary challenge to Trump April 15. Weld has also been on the ticket as a Libertarian vice presidential candidate.

Spiritual leader and presidential candidate Marianne Williamson has the biggest battle to gain name recognition in the race. She solidified her spot May 23 in the first presidential debate scheduled for June.

Entrepreneur Andrew Yang is a wild card for the 2020 Democratic nomination, but has gotten attention for his out-there policy proposals, including a $1,000-a-month universal basic income for all Americans called “freedom dividends.”

Rumor had it that former Georgia Democratic gubernatorial candidate Stacey Abrams might become Biden’s vice president pick once he declared his candidacy, but she asserted Wednesday a presidential run could still be in the cards for her. Abrams, the Georgia House of Representatives’ former minority leader, had refused to acknowledge Republican Georgia Gov. Brian Kemp as legitimately elected but also worried in 2016 that Trump would not concede the presidential election if he lost.

Republican Maryland Gov. Larry Hogan has not committed to challenging Trump in a primary, saying he would wait until seeing the results of special counsel Robert Mueller’s report. Mueller handed in his report Friday, but its full contents have not been released. Hogan is a Republican governor in a blue state and faces steep odds in a primary matchup: 73 percent of voters said they’d vote for Trump over Hogan, according to a Morning Consult poll from late March.

This story will be updated.